Last week I attended the World Free Zones Organization’s Annual International Conference and Exhibition in Montego Bay, Jamaica. I heard a great deal about where the global economy seems to be headed for the next decade—onshoring/nearshoring/friendlyshoring and a retreat from the razor’s edge of “just-in-time” logistics in response to the collapse of global supply chains; some very interesting big/high-income vs small/low-income country disagreements with respect to the likely effects of the proposed global minimum corporate tax; and a firm entrenchment of ESG and Sustainable Development Goal-anchored corporate strategy. But what has stuck with me the most is the impression I came away with about where Jamaica itself is heading.

Allow me to preface this blog by stating that these are merely my observations based on presentations and remarks from various Jamaican officials, including Prime Minister Andrew Holness, as well as my own conversations with a few Jamaican officials. It is not the product of a deep economic analysis or an intimate, personal familiarity with Jamaica’s politics or economy (I’d been to Jamaica once before this trip, for vacation last year). Please treat what I report in this blog with the same healthy skepticism you would rightly treat any set of claims from government officials elsewhere. I’m sure some degree of what I heard was embellishment, but I simply don’t have a mechanism to perfectly filter out that embellishment other than with my own experience as to what seemed credible and what did not. With that out of the way, let’s explore.

What countries might Jamaica be looking to as inspiration when charting its economic future? Prime Minister Holness and Senator and Minister of Industry, Investment and Commerce Aubyn Hill (as well as Curaçaoan Prime Minister Gilmar Pisas) offered the following “rays of hope:” Dubai, Singapore, Rwanda, Estonia, and Hong Kong. Each of these is unique, but all have proven over the last several decades that small countries can build world-class economies with world-class governance. Prime Minister Holness argued forcefully that one day soon, Jamaica will join Singapore, Dubai, and Rotterdam as an equally important hub of global trade. Kingston may be the seventh largest natural harbor in the world, but it will certainly take some time, investment, and good fortune to approach the status of these ports. A worthy goal! It was refreshing to hear public officials talking straight about a serious and thoughtful strategy for economic development and not give service to the gimmick, get-rich-quick crypto schemes other leaders have chosen to embrace as their national development plan.

Invocations of Singapore, Dubai, and other countries mentioned by leaders throughout the world as economic inspiration is nothing new. CCI highlights these cities, as well as Shenzhen, as examples of rapid growth brought about by charter city-like governance. it might even be said that it is normal that leaders of lower-income countries invoke such aspirations, only to have these batted down by high-income Westerners as unrealistic or silly—which in the absence of a realistic strategy and ability to execute that strategy is probably true. We should also be clear—is Andrew Holness Lee Kuan Yew or Sheik Rashid? Is Jamaica in 2022 Singapore in 1965 or Dubai in 1970? Probably not, to both. But that doesn’t mean that Jamaica shouldn’t be aspirational, or that its aspirations are as far away as one might think. I came away from this conference feeling quite bullish on Jamaica’s prospects for capturing a greater share of global trade and strengthening its domestic economy.

I have no firsthand knowledge to how true this feels as someone trying to do business in Jamaica, but I got the sense that there is a whole-of-government approach in place to making Jamaica an attractive investment destination, backstopped with a vigorous, pro-business attitude coming down from the top of government. Between the Ministry of Industry, Investment, and Commerce’s Trade Facilitation Task Force, Jamaica Promotions Corporation, Jamaica Special Economic Zone Authority, Port Authority of Jamaica, Airports Authority of Jamaica, Jamaica Customs Agency, various other government agencies, and their private sector and civil society partners, there appears to be agreement on objectives and good cooperation between these entities where necessary. Having heard directly from representatives of these organizations on how their agencies are working to facilitate investment in Jamaica, the country’s 6th place ranking for registering a business and 15th place ranking for accessing credit in the World Bank’s 2020 Doing Business project felt entirely appropriate. It also felt appropriate that Jamaica’s scores across various regulatory areas in Doing Business were improving. Jamaica’s government isn’t just talking the talk—they’re actually making regulatory and administrative improvements.

The various Jamaican agencies engaged in trade and investment-related activity have effectively utilized foreign expertise via PPPs to build out, modernize, and in some cases operate road, seaport, airport, and energy infrastructure across the country. The new, 650-acre Caymanas SEZ, located just outside of Kingston with direct port connectivity, is currently under development, as are zones serving a variety of purposes around the country. While deliberate attempts to locate zones in underdeveloped areas has failed in India, among other places, Jamaica may see some success with its dispersal strategy given that any chosen site will still have good road/electricity/water infrastructure, be relatively close to a seaport or airport, and have access to labor. I don’t expect some of the other proposed specialty zones to perform as well as Caymanas, but I think at the very least they will generate some new business. It’s also probably more practical, both financially and administratively, for the government to make a concerted effort at generating growth across Jamaica rather than simply concentrating all investment activity directly in Kingston and Montego Bay, which would likely struggle to accommodate a massive influx of new residents. It’s also worth bearing in mind that Jamaica will certainly continue to benefit financially from a very strong tourism sector while the government invests in more productive sectors.

And speaking of tourism, this brings me to the final reason why I’m bullish on Jamaica: location. As US companies look to bring production and supply chains close to home, Jamaica is an attractive option. It’s very close to the US, is English speaking, has good (and improving) trade and industrial infrastructure as discussed above, is far more politically stable than Mexico, and is well situated to handle maritime traffic coming from anywhere in the world. Its central location in the Caribbean makes Jamaica a perfect hub for supply chains based throughout the region. And in terms of American geopolitical concern, there’s essentially no scenario in which the Jamaican government becomes an ally of the Chinese Communist Party, as is the case for many investment destinations elsewhere in the world. Jamaica’s violent crime problem is a notable concern, but an end to long-run economic stagnation might just help curb crime.

Jamaica hasn’t seen sustained economic growth above four percent since the late 1980s/early 1990s, and took a major hit with the shutdown of tourism during the pandemic. For a country at its GDP per capita ($5400 nominal/$9400 PPP), the combination of low growth and susceptibility to large negative shocks is a recipe for long-term stagnation. The next 10-15 years will demonstrate whether or not the government’s strategy, combined with current trends in manufacturing and logistics, can be expected to produce a new “Caribbean Tiger” or produce more stagnation. I’m predicting that the truth will be somewhere in between, but closer to a new Tiger than to another bust. 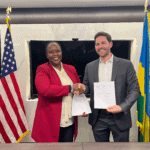